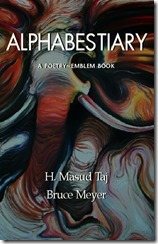 In his introduction, Barrie Poet Laureate Dr. Bruce Meyer informs us why this volume was conceived as an Emblem book. During early Renaissance, popular literary works featured elaborate woodcuts and these illustrations were accompanied by poems to present the idea, before the topic in question was discussed in detail. He says,

“Some of my reactions to the poems pointed me towards general ideas about the importance of symbols and iconography in English and European literature. Taj’s animals each project their own personality; their own sense of self-awareness, and their own unique identity.”

Oral poet from Ottawa, H. Masud Taj recalls his early childhood in Bombay, when a natural love for all God’s creatures was bolstered by tales of Panchtantra, Aesop’s Fables and characters from Disney. “It was but natural that Mickey Mouse, Bugs Bunny, Tweety and Donald Duck should express themselves as humans. Part the monitored movement of these graphic characters, part his training as Muslim, part design talent that led him to architecture, Taj is an accomplished calligrapher too.

The reader is also informed that this version of an emblem book can actually come alive in readers’ hands. The writers hold that a book fulfills its destiny in this manner. The “Horse” confesses that its movement is meditation and canter, mere foreplay:

When I break into a gallop

The circle of horizon

Begins to slip away,

As I touch down to beat

The world with my feet

So that it may spin.

As the words work up to a frenzy, one can feel the power that can kick away the inertia and force the earth to roll. Yet Taj’s horse is not merely a muscular creature. It is a manifestation of essential energy that gives rise to physical phenomena.

At the twitch of my nostrils

Each time I turn my head

Swirling my mane, spiraling off galaxies,

I watch the universe change.

One wonders if it is the science he practices in manipulating spaces to encompass living creatures that grants him the unique vision, which has ability to blur the familiar into sharpness of hitherto unknown idea. Sixteen million colours fail to shake the zebra from its perfection of black and white:

I am the bipolar icon in black and white;

The black centre around which whiteness swirls

The white shroud concealed in darkness.

Yet, it is not only this sense of transcendence that ‘Emblem Book’ comes alive. Alphabestiary from Exile Editions is a bridge not only between human and animal world, between East and West; it is also a conduit between physical paper-print books and virtual e-books. Unfortunately in a world filled with Apps, the major players are yet to integrate QR reader in their OS. However, if you are patient enough to hunt out one from available selection, your QR reader would lead you to author readings from text, author discussions on the writing process and their insights into creative process in play. For those less adventurous, a page is devoted to listing URLs that would connect the reader to these video clips.

Integrity, continuity, flow etc. have classically been the requisites for ideal appreciation of art. It was logic-oriented Poe who could not help transporting his methodology for designing tales of mystery and imagination, to domain of poetry. As expected, it leads to a narrow morbid area. Even as I was enchanted by the perfect logic of his thesis, I never expected to find practitioners to come up with more poems like The Raven. The integrity of a poem lies beyond connected images or narration. Poetry of Taj is more about discovering buried synapses that connect sensate and the inanimate.

In a recent conversation, he confided that spaced reactions and experiences hoarded over time, present themselves in sharp clarity and he is able to write the poem down in his calligraphic hand in a single sitting of ten to forty five minutes. A long poem took him around four months to conceive and four hours to pen. Even though I was half-tempted to ask if the weight and flow of his strokes affected the poem, I killed the thought. I knew that there is little relationship between his creating a poem and writing it down on paper. For the oral poet, it is the weight and timbre of sound that works as contributing factor. The calligrapher, distinct from the poet is equally a receiver-creator who makes visual-tactile response to the poem in his head. In a way Taj through calligraphic presentation of poem makes it a blend art-form like Ghazal, where the listener never truly realizes the source of transportation — literary image or the musical note.

It is in such a backdrop of multiple expressions that Bruce Meyer boldly contributes with short prose pieces. As the original thinker who conceived the whole project of putting it up as an emblem book, the burden he shouldered gradually unfolds as he writes a counter-piece to poem. The mixing of literary genres has been attempted earlier with varying results. As I went from poem to essay, often going back to some lines, I kept being reminded of Milan Kundera. I was always conscious that in emblem book there were two different minds, the output created in different geography and time; that such a collaborative work faces far different challenges than a single author experimenting with modes of expression. What I perhaps unconsciously yearned for was the cohesive expression that remains unblemished even as Kundera breaks form.

It took Firefly to warm Bruce up. The Professor of English responded in best way possible to Ant, Bull, Cat, Dragon, Elephant bringing imagination and scholarship together with brevity and wit but the poet Bruce Meyer held his speech. To the “Nostrils are a flaring/ Twin black hole system/ Snorting last flares/ Of collapsing suns” we have Bruce’s observation on Bull:

Yet for all the connotations of rebirth that are associated with the bull, it is also linked to the haunting Western image of the god who must die every spring in order for the world to be reborn, both spiritually and vegetatively.

Taj’s “I am as large as memory” Dragon attracts its ancestry in literature – Tiamet surfacing in pagan religions, wounds Beowulf and symbolizes evils of Catholicism in Spenser’s The Faerie Queene. It gives rise to supportive myth of dragon-slayer but there is little in the short text to balance the poetic imagination:

No myth can last the cycle of my breath;

No fire in the breasts of your armoured knights

No glints of steel in their hand can withstand

The force of my breath, my acidic saliva,

The blaze in my eyes.

He is moved by the plight of one who “Celebrates the excess / Of memory / With the memory / Of excess” but is now on verge of extinction and “must be preserved because… its absence would create an enormous hole in nature that our imaginations cannot fill.” Bruce ends this piece with: “This is something to remember. This is something one cannot forget.” The emphasized antonym of imperative readies the reader to look out for twin strands of poetry disguised as verse and prose.

Back to Firefly, the first poet introduces paradox of burning without passion, glowing without heat; subjectivity succumbing to objectivity to retain its essence, the eternal flame. The second responds with a moving childhood experience with fireflies that leads to a cardinal truth:

I captured one in a glass jar… (hoping) it would glow in the night… It did not. Once it was taken out of its place, its light went out. It had no one to speak to, and I believe it died of loneliness or from its inability to serve the purpose for which it was created – to share the divinity of its flame of desire with other fireflies who understood what it was trying to say in the darkness. Language gives us hope only when we understand it and are able to reply to those who speak to us.

I believe in consumer society.

For I am the consumer

The book may have its root in illustrated primers for children, but the poetic maturity of Bruce and Taj, intertwined as twin strands of DNA, brings home the truth that it is only through regaining the child within, we become wise. The book succeeds in rekindling appreciation for poetry as well as emphasizing the need to  push  the freeze button on an info-driven rush that comprises human life.  Intellectual query may at some point, lead one to reality of absolute loneliness, but listening to sounds and striving to learn the tongues of living beings we normally feel superior to, the realization would dawn upon us:

… that the sheep’s sense of togetherness points us to a lost, elegiac, pastoral place where we were once orderly, peaceful, and at peace with ourselves.

H. Masud Taj is an architect, calligrapher and oral poet whose poems get featured in anthologies of Indian poets (Penguin Books India 2002; Wespennest Austria 2006; Bloodaxe UK 2008; TLR USA 2009) as well as Canadian poets (Atlas 2007; Rogue Stimulus 2010). He is an Adjunct Professor of Architecture at Carleton University in Ottawa.

Bruce Meyer is the author of thirty one books of poetry, fiction, non-fiction, pedagogy and literary journalism including the national bestseller, The Golden Thread. Meyer is the inaugural Poet Laureate of the City of Barrie and a professor of English at Georgian College.

One response to “Soul Animated: Review of Alphabestiary”