Youth today would find it hard to imagine a world without facilities available to them. As a writer quipped that in future, grandchildren would laugh at you, if you told them you could not read Amazon books on Kobo or Sony format on Nook. Apart from ease, what else is it that technology realizes? Empowerment. Which may work both ways.

The sufferer is economically deficient class, community and individuals.  Less, through poverty and more through refusal to get distracted, did a number of communities invite a techno-bias. There is nothing that hurts as neglect. It is an invisible weapon of decay.

Often, perfection in their knowledge-system demanded insularity and Indian sciences survive today only where this rule is followed. Far more blunt than imaginary deductions of physics that lead to uncertainty, is the truth that any interaction between two systems is certain to change them both. To an alloy the touch of gold would bring little change in its value, but the purity of gold gets destroyed at once.

Indian artiste is the wrapt most self-situated individual. To qualify this statement, consider his motivation. His art is the medium granted to him to offer his gratitude to creator for having been granted the ability to offer it. Tautology? All forms of art transcend words that concretize thought. Suffice here then, for some incomprehensible reason, he would behave in a fashion that does nothing to weld a relationship between his art and the world that surrounds him. Why? Why, is he not bothered by presence of others besides him, on this planet? Is it not his duty to acknowledge them and do something for them?

END_OF_DOCUMENT_TOKEN_TO_BE_REPLACED

We are truly social creatures now. Man’s dependence on others has reached exponential levels; also his connectedness. The time between one man’s thought another’s benefit is drastically reduced. Also, time is no longer an absorbent or  muffler that might diminish or soften harsh ideas or actions. This “real-time” action takes away any meaningful action on individual level. While it turns life into a queue or a traffic lane with little leeway for self-directed  action (theirs not to question why, theirs but to do and die), greatest sufferers are those who dwell in the realm of creativity, imagination and ideas.

On the Wall -- Gary McHarg

The movement of ICH (Unesco Convention 2003) is directed against the constrictive, regimentation-oriented all-pervading force of globalization. In broad terms it aims to safeguard traditional practices that rise out of and define the life-style of a community but are threatened by socio-economic changes amplified by technology that spell “modernity”, “progress” and “global unification” today.  It rightly recognizes that to ensure continuity of practices involving oral transfer of knowledge the community needs to be empowered so that it may retain its mode of existence.  There is emphasis on the issue of privacy.  In the attempt made by outsiders, to preserve the traditional practice there is fair chance the endeavour turns into “museumification” (relocation of artifact/ practice away from its natural context  through suggested economic measure for self-sustenance) and  “demuseumification” (forced interaction robs people and practice of their original context  and artificially re-places  them for “authenticity”) thereby destroying the very purpose.  The convention reinforces consent, involvement and commitment of the community  in safeguarding a practice.

On first count, intangibility in several of such practices lies in experiential truths gleaned over a period and preserved as racial memory; here, in part, a direct approach might work without absolute dismantling the practice. The other kind is that, which permeates all artistic expressions. This has no substitute. It is an end to itself.  As there is no distinction made between the two, practices of latter kind are certain to suffer by any outside intervention. Situation grows still more complex with realization that most practices involve both aspects of intangibility.

Like the recurring decimal in arithmetic, even when a phenomenon has been explained in all possible manner, there always remains a non-terminating section of sense that eludes language. This indicates that indestructibility is an essential aspect of intangibility.  Intangibility: Transcending Visuality

But for all that, a clear mechanism has not been defined to this end.

The convention further recognizes the urgency “to ensure respect for the intangible cultural heritage of the communities, groups and individuals concerned”. As a corollary, it also provides “to raise awareness at the local, national and international levels of the importance of the intangible cultural heritage, and of ensuring mutual appreciation thereof”.  Whereas in essence, this is a simple statement of what their practice is to members of a given community; the action  from outside, even when it is to preserve and promote, shall destroy the very fabric. Then, is the whole activity futile? There is a simple and clear answer which translates the noble idea into possible action. The end of all action — at least end of that, which affects the living conditions of the community. With no external distractions the people and practice shall continue as directed by their local habitat. Even if that was possible, would it be advisable – keeping them perpetually under certain conditions and infringing upon their right to change? This is a perfect case for differendas defined by Lyotard. So often, like Eliza Dolittle, the learner complains about the loss of his innocence he was never conscious of in the first place.

Prior to the Unesco Conventionthere never had been voiced such a concern that sought international consensus in a planned manner. A few decades back, when visionaries of a global village were engaged with more tangible matters, it was too early to predict the predatory instinct of this benign utopian force. The convention is a timely answer to developing situation. Like all actions taken in response to crisis, it is to be commended more for its spirit – the essential intangibility – that recognizes the danger. It is justified in its demand to ‘ensure respect’. But only in an ancient civilization being shaken up by forces of “globalization” like India, can one understand how challenging is this demand.

Respect was the manifest most and best practiced aspect of intangibility that despite all external influences and interaction maintained the complex social fabric of this nation. Globalization functions on principle of erosion of intangible aspect of such intrinsic values. Today, within a single decade respect has been chased away from personal, social, aesthetic and vocational areas. Political and legal enterprise succeed in establishing justice for certain idea at the cost of sacrificing older yet still valuable ones. In a sense, in absence of broadening of our understanding, we destroy order to make way for the future one.

A community gains its identity because of the balance it achieves with external conditions. They sing and dance in a certain way, on such occasions as ‘holi’ or  ‘potlatch’, because their knowledge and belief propel them to do so. It is theirway to attain harmony with universe. Integrity of observation relies on holism. If one were to say that song and dance are elements of their culture but some or the other of their practice being ‘barbaric’ is not, hence the first should be encouraged while the latter decried, it is being judgmental. How can we stop being that? Is not all progress judgmental? Secondly, the moment external conditions change (the presence of alien world intruding through ‘cultural facilitator’) the coherent, integral essence is violated. The foreign curiosity about the dance, song or their head-gear makes the members conscious of these things in a new way; they themselves become agents of museumification. 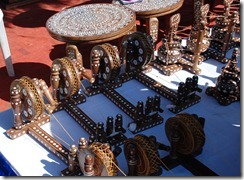 Respect demands a certain level of fixity, permanence, reliability in the the tangible world. When the modern conditions reduce life to biological category of production and reproduction, human beings have no control over their lives at most basic level; they shall not be able to understand, uphold and practice such values in their true aspect and bloom. The current attitudes and processes aim at fluidity, flexibility, change and adaptability, in attaining which the traditional definitions are clear impediments. Thus the respect rising out of love and veneration is changed to acceptance of a stern action or confinement  for immediate local gain. The integral aspect of knowledge has given way to practiced expected responses. A traditional world view based on apparent non-change has woken up to dizzying whirl of change and novelty inducing the individual to exchange intangibility for visuality.

This bubble experientiality does not allow organic existence of any idea, discarding the present for a bold shiny one in the offing. Scholars have often expressed their anxiety whether tradition of Indian Classical Music would survive. To learn such an instrument as Rudra or Vichitra Veena one has to go through several stages — learning and mastering Dhrupad singing, playing simpler instruments like Sitar, Sarod and then graduating to the Veena. The whole process was based on unquestioned acceptance of the basics, regular practice and compete dedication to one’s art. The process breaks down to rich availability of time. Learning itself was the end thus establishing again the principle of harmony which communities follow. As all actions are understood to be agents for some material gain, music too is being molded to be an activity of immediate reward. Not only is richness of time no longer a given, the intangible relation between activity and joy has been derecognized. Scholar musicians would use their art to thread pearls of wisdom — the notes of Sam Ved being preserved in Raga Sameshwari — but would such a thing be possible in future?

If only the whirlwind nature of change could be contained, practices would not require safeguarding; they shall unselfconsciously change surely and as imperceptibly as earth on its axis, giving rise to ideas fresh as seasons.